If you hate looking sweaty in the gym or worry that people will think you’re crazy if you pull faces while you lift weights, then you need to read this…

On Monday I wore a weighted vest for the first time in the gym and (after I finished going through a particularly grueling workout) it made me think about how I’ve reached a point of really not caring how I look while working out.

I’m fairly short and this weighted vest was so big I almost looked like a child wearing their parent’s top (albeit a very heavy and strange top), but I didn’t care. If it was going to get me results from my workout then I was happy. Well, as happy as you can be while doing a crazy hard workout.

I’ve known that I don’t care for a while because I regularly pull crazy strained faces while working out, but wearing the weighted vest made me think how important it is that we don’t care about what other people think while we are exercising so I wanted to talk to you about it.

Let me start by saying…

We all pull faces/sweat/grunt. Seriously.

If you’re worried about the faces you pull while lifting weights or the grunting noises you make on the treadmill…or even if you try not to sweat ‘too much’ (whatever ‘too much’ is), listen up. We all do it. When I’m working a certain muscle group in the gym my top lip does an involuntary Elvis impression. Yes, I’m serious. And when I’m doing pretty much any exercise my face decides to take on a whole life of its own pulling all sorts of expressions, but I don’t care because I’m working hard towards achieving my goals.

We all do it. Can you honestly remember ever seeing someone doing any form of exercise to their full capacity while maintaining total composure!? It’s normal. Please stop worrying about it because we all pull faces, we all grunt (or scream, or swear…whatever your thing is) and we all sweat. A lot.

Embrace the face pulling and grunting, it all means you’re working hard towards achieving your goals.

Something I know used to bother me when I first joined a gym (many years ago) was the thought of other people watching me, judging me, so let me start by saying that the majority of people in the gym (or fitness class) are busy with their own workouts so won’t be watching you.

On the off chance that someone is looking at you while you grunt or gurn, it’s likely that they’re loving how much effort you’re putting into your workout. Even if they are looking at you in a judgemental way, who cares!? By sweating and doing what it takes to push hard in your workout, you’re getting closer to achieving your goals, so it really doesn’t matter what anyone else thinks!

[bctt tweet=”Don’t let your fear of what other people think get in the way of your workout.”] 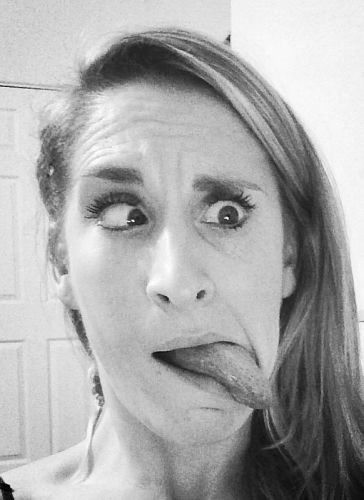 Actually, I’m not advising you to do that (ever), but you get what I mean. Just don’t care what anyone else thinks!

If you’re putting in enough effort that you need to do the grunting/face pulling stuff then that’s awesome! You’re clearly a badass in the gym, so high five!

Keep working hard and pulling those faces. Grunt like nobody ever has before and don’t be afraid to sweat! We all do it.